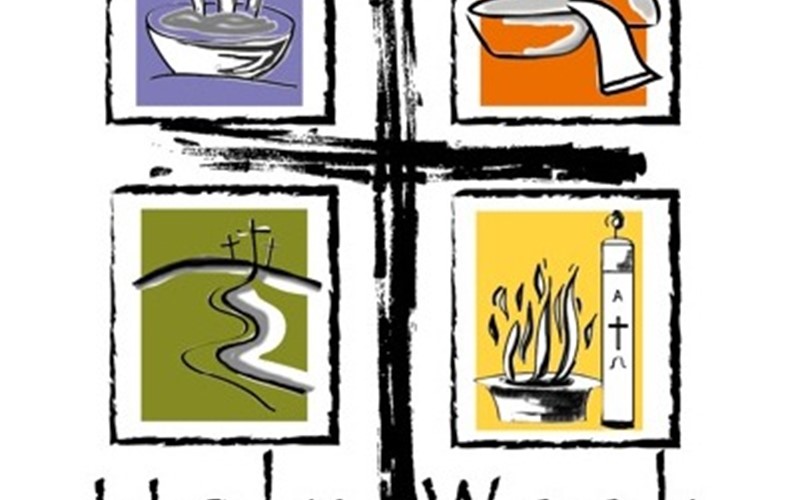 As I write to you this early morning, birds are already at the feeders. The cardinals are perched within the safety of a Live Oak, ready to swoop in after the larger black birds trimmed with scarlet are finished. We have a particular feeder for the smallest of our feather friends, which squirrels are relentless about finding a ‘way in’. And with all this beauty right outside the home office window, February 26th, Ash Wednesday seems years and years behind us. Leaving the service with the sign of an ash cross on our foreheads, who could have foreseen that this Holy Week would have been named “hell week”, by our countries most esteemed scientists, doctors and epidemiologists? Even so, what is foremost in my heart, which seemingly competes with the latest serious, and to be ‘paid attention to’ news, is the other cross beneath the ashes of dust to dust-- the cross of our baptism marking us as Christ’s own forever. Even in the midst of this real pandemic, we’re forever held in arms of Love.

This has been a Lenten season that will be recorded in the re-telling of our personal and national history. This Lenten season will viscerally record the ways in which we repent of our distorted relationships, so that our Easter joy may include the celebration of new ways of being God’s people, with God, one another and creation. This Lent and Easter will shine the brightest light on the extraordinary Good News that in a world full of cast-offs and castaways, downtrodden and fallen, “Things which were cast down are being raised up and things which had grown old are being made new.”

• It took, you see, someone who knew brokenness to recognize the crucified Jesus made once again whole.
• It took someone who had been cast down, to see the miracle in being raised up to life again.
• It took someone grown old and weary with the world to recognize Jesus himself made new.
• It took Mary Magdalene, who that Easter morning was the first to be able to see that Jesus’ death had done something no other death had ever done. Mary Magdalene, the scarlet woman, the picture of impropriety, alone able to recognize on Easter morning that God that day had colored entirely outside the lines, and had given each of us as our own, the new life able to heal all, make all new.

It is Holy Week 2020, another opportunity for each of us to ‘color outside the lines’; restore right relationships with one another and all of creation; to lift up the downtrodden in ourselves and one another, to make all things new and more alive than ever before imagined; to make a right beginning, again and again. NLJ+