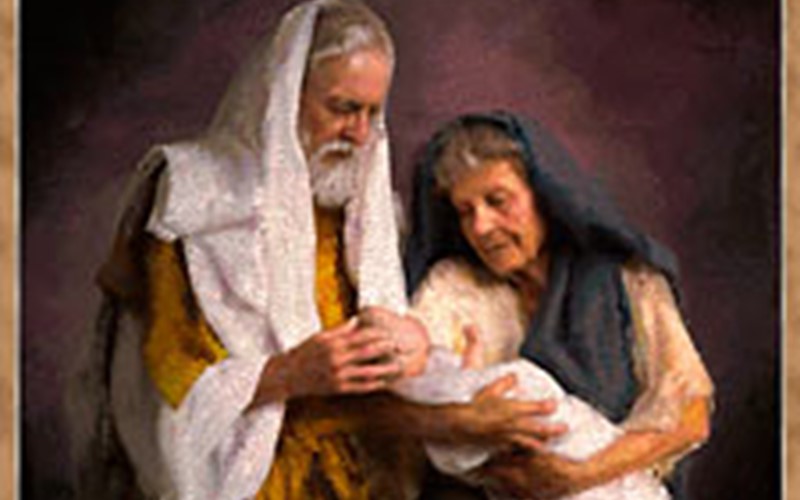 Abraham is greatly honored as the Father of faith. It's time to give great thanks for Sarah. One day, angelic messengers tell Abraham that his wife will have a child within the year. They ask him, "Where is your wife Sarah?" " There in the tent," he said. Then the Lord said," I will surely return to you about this time next year, and Sarah your wife will have a son." Now Sarah was listening at the entrance to the tent, which was behind him. Abraham and Sarah were already old, and Sarah was past the age of child-bearing. So Sarah laughed as she thought, " After I am worn out and my master is old, will I now have this pleasure?"

After the angelic messengers had left, an embarrassed and angry Abraham confronts his wife and tells her she shouldn't have laughed at God's promise. The wonderful but tired Sarah at first denies her laughter, but perhaps she then said to Abe," So if I did laugh, is that so bad? At least I still have my sense of humor." She had put up with her husband's apparent foolishness, moved with him far from family and friends, humored him when he told her his vision that their descendants would be as numerous as the stars in the sky, suffered the shame of having her husband pass her off as his sister, lest he suffer harm, put up with Hagar's scorn when Hagar became pregnant with Ishmael....And still she loved her dreamer husband. She was a great lady, but by that day she was tired on lots of levels. That laugh, which she thought was to herself, has been recorded for all to hear. It was perhaps a rueful laugh, a somewhat disbelieving laugh, but a wonderful echo of Sarah's resilience.

On our journey there are times when we feel worn down, emotionally spent. God's promises seem as remote as the stars in the sky. We keep on, keeping on, caring for the people entrusted to us, one day at a time, at times laughing to ourselves - keeping that sense of humor which is the echo of God's life in us.